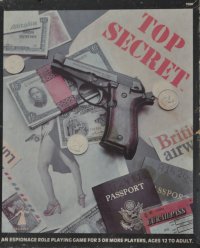 TOP SECRET is your passport to the exciting world of international espionage and intrigue. All the danger, glamour, and adventure of a secret agent’s life await you as today’s headlines or the more exotic spy settings of movies or television provide the backdrop for every mission.

TOP SECRET is a role playing game where players assume the roles of various undercover agents, carrying out the missions assigned by the Administrator of their agency or organization (the gamemaster). The rewards can be great, but every mission is fraught with risk and peril, for the life of a spy is a dangerous one!

The TOP SECRET game booklet is a sourcebook of information for the play and creation of all sorts of espionage adventures, and the imagination of the players is the only limitation o nwhat is possible. The full range of spy activities is represented—including investigating, smuggling, rescuing defectors, infiltrating enemy agencies, and eliminating those opposed to the organization. The action can be set in foreign capitals or the secret hideouts of deranged supercriminals, but one thing is certain: no one will know the outcome until the game is played and true loyalties come to the fore!

An introductory module allows players to get started with TOP SECRET after only a minimum of preparation, and provides a scenario setting for several game adventures. Once the module has been used, players and Administrators both will have plenty of ideas for creating imaginative adventure missions of their own.

Every element of the popular spy thrillers can be found in TOP SECRET—from vicious guard dogs and devious traps to secretive double agents, turncoats, and the inevitable charming and seductive enemy agents of the opposite sex! Even the far-out gadgetry of the spy trade is available for top agents on the most deadly missions. But TOP SECRET is not strictly a “fun and games” style of game, for it also boast such realistic features as a voluminous listing of contemporary modern weapons with game statistics, and one of the most extensive hand-to-hand combat systems found in any game. TOP SECRET is flexible enough to allow whatever type of game is desired, and provide plenty of challenge and enjoyment in doing so.

TOP SECRET includes everything needed to start playing your own adventures in the world of international espionage and intrigue: game booklet, introductory module, and set of percentile dice. The only other things necessary are a good imagination and a spirit of adventure!

by Chris Johnson Introduction These rules allow quick, efficient, and accurate means to incorporate car chase scenarios into gaming sessions. The rules lean more toward simplicity than technicality. They are designed specifically to be...

When Only The Best Will Do

by Kevin Marzahl In 1945, the Germans lost the Second World War, and for the second time since the turn of the century, they were forced to disarm. When West Germany was allowed to...

SECURITY CLEARANCE LEVEL: For Administrators and Agents BEGIN MESSAGE TO: Administrators desiring clarification of inconsistencies between the statistics found on the Weapons Chart and statistics as generated using the optional Gun Design rules. BY...

by Jimmy Anderson, Chris Johnson, Brent York, and Craig York The SE File is a compendium of specialized equipment available to the agent through his or her bureau. Prices are included for agents who...

by Merle Rasmussen Editor’s Introduction The information you are about to read has been obtained by this magazine with absolutely no difficulty whatsoever. It is not classified or restricted, except that you need the...

by Desmond P. Varady The mission had gone off without a hitch. Agent Dan and his partner Gadgets were running through the forest now, but a boat waited for them just a hundred yards...

How to Make and Maintain a Top Secret Campaign

by John J Terra When I originally introduced the Top Secret game to my AD&D game players, the response was less than over-whelming. Out of the fifteen people in my campaign, only four showed...

The NPCs that are detailed have been copied, more or less, word for word from the relevant Top Secret Mission Modules. At present modules TS 002, TS 003 and TS 005 have been covered....

Written by Merle Rasmussen Nearly every nation has at least one intelligence-gathering agency to keep tabs on its neighbours. Keeping track of all these organizations is a difficult task even for secret agents. Real-life...

Written by Merle Rasmussen This is the last in a series of articles presenting the TOP SECRET game world’s intelligence community. DRAGON issue 93 described the game’s fictitious spy agencies; issues 97 and 98...