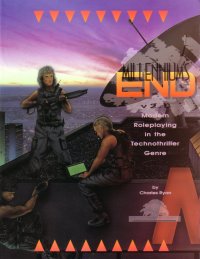 It’s two in the morning. The office is forty stories up, high above the sirens, the gunshots, the cries of pain and anguish that are the city at night. Michael is bathed in the glow of his laptop, typing furiously as he navigates the labyrinthine directories of the corporate mainframe. In the pale light of the doorway, Laenna’s silhouette stirs.

“Someone’s on the elevator,” comes her whisper over the radio headset.

“No way,” Raleigh answers from across the room. “I’ve got the building control routine up. Elevators are dead.”

“Come see for yourself,” Laenna replies. Sure enough, through the green glow of starlight googles the tiny numbers blink brightly as the elevator ascends.

“We’ve got a problem,” Michael interjects. “The files aren’t here. Sawada lied to us.” He turns in the glow of the monitor. “Door lockouts are coming up all over the floor.”

Set up. No one knows we’re here. And if that’s Techtonics Corporation security, no one will find our bodies, either. Through the darkness comes the quiet chime of the elevator, and an almost inaudible click as Raleigh flips the safety off his P90…

Millennium’s End is a critically-acclaimed roleplaying system set in a dark future just a few short years away. Based on today’s hottest technothriller movies and fiction, Millennium’s End has a gritty, realistic feel and a fast-paced, progressive game system. Characters carry out investigations, espionage, and para-military operations in a post-modern world where might makes right and all the cable news nightmares of today are a reality.

By DdB Stylish European Vehicles for Operatives … and the Opposition Whereas the 1980s and 1990s were about cars that were ‘small and convenient about town’, the late nineties and early 21st century is...

By DdB A look at modern secure transit systems Cash in-transit (CIT) systems are an interesting feature of modern business. As such, they provide the scope for playing a part with modern role-playing scenarios....

Under Lock and Key

Written by DdB Page Count: 27 This scenario is intended for a cell of between two and four characters that have a particular speciality in: Conducting surveillance operations; Technical proficiency with surveillance equipment; Covert...

Idea by The Alchemist, hacked by Crowley Page Count: 3 Mission Length: Not really a mission as much as a location for a mission Cell Experience Level: Any This document outlines an organization known...

By Paul Emerson This fighting style was born of the history, particularly from World War II, of Israel and is, perhaps, the ultimate martial art in the world, except to call it a martial...

Watchers in the Woods

Written by Roger Stenning for ME v2.0, ©1998, and published initially by the Impossible Scenarios Group Page Count: 34 Mission Length: Four plus sessions Cell Experience Level: Rookie – Veteran It was supposed to...

Terror on the Constantinople

Sons of Erin, The

Written by Mark Baker for ME v2.0, ©1998 Page Count: 27 Mission Length: Potentially more than one session Cell Experience Level: Operative – Veteran 3, and well-balanced There is an uneasy truce between the...

Written by Kris Miller, ©1997, and published initially by Chameleon Eclectic Page Count: 12 Mission Length: One session, though it could be extended Cell Experience Level: Rookie Having recently completed BlackEagle’s basic training and...