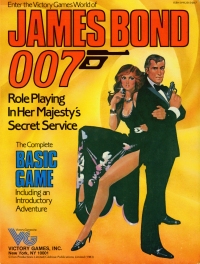 Enter the exciting and dangerous world of spies, high speed chases, gadgets, casinos, glamourous women, thugs, goons and villains scheming to rule the world. In the James Bond 007 RPG, you play a secret agent taking action against enemies of the free world. You can play James Bond himself, or any Agent or Rookie you create.

The game is especially designed to favour the players. After all, James Bond doesn’t end the movie as the loser, does he? You cannot beat the bad dice rolls, but the GM is encouraged to balance the game in the players’ favour.

The 160pg softback B&W book is illustrated with drawings taken from the films and contains all you need to play. The core rules cover character creation, combat, gadgets, a good introduction to RPGs and the style of the game. There’s advice for GMs, lots of NPCs straight from the films (Rosa Klebb, Karim Bey), MI6, info on casinos and international travel. The book also has a solo adventure to let new players practise the rules.

The feel is very strongly of the films, but you can easily use the content for any spy genre game.