New Espionage RPG: Spy – a game of action and espionage

New intelligence has surfaced of a new espionage-themed roleplaying game so we sent an agent undercover to find out more. This is their report: 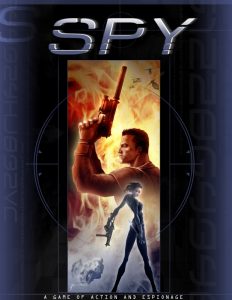 Players create agents who belong to a covert tactical response organization, called the Factory. The Factory was created to protect America from Threats both Foreign and Domestic. Are they officially known? To the general public, this organization does not exist. For those in the field of intelligence they are fully aware of the Factories existence.

The Factory’s reach is global and their connections run deep. Agents are specially selected from all walks of life- Military, Criminal, and Civilian. They believe the varied backgrounds of their Agents brings unique and beneficial areas of expertise that could be of value to the organization.

Spy is a Roleplaying game that brings us back to what games used to be- easy to learn and best of all affordable. Inside this book you will find a Complete game with the following…

Our agent further reports that it can be obtained from DriveThruRPG and RPGNow for $9.99.