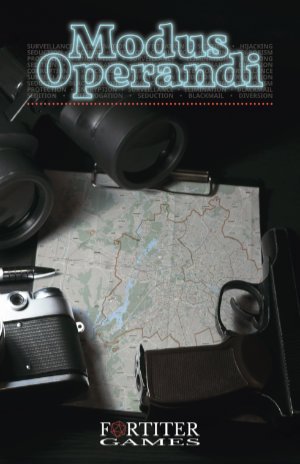 To most of you, Modus Operandi is the name of this website, to me it’s also become a brand in it’s own right. When I decided to work on my own take on an espionage RPG there was only one name that came to mind. That was June 2020. Less than a year later, and I’ve ordered the proof copy of the POD version of Modus Operandi. That should be here in a couple of weeks. If everything looks good it will be released into the wild. The PDF will be available as PWYW (Pay What You Want) with a suggested price of $7.00. There will also be a POD version (95 page, digest-sized hardback in full colour) at $19.99 plus shipping.


Distribution will be through DriveThruRPG and links will be posted here when it goes live.

Modus Operandi is a roleplaying game of super spies and secret agents set against the backdrop of the Cold War of the 1980s.

Go back to basics and become an expert.

Modus Operandi is an espionage role-playing game. You are an agent employed by a secret organisation working to stop those who would destroy or dominate the world. While the rules support games set in any decade, the default setting is the 1980s.