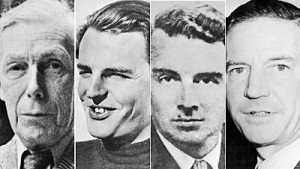 The early 1950s were an alleged hotbed of Communist activity in both the US and UK. Senator McCarthy lead such a fervent attack against Communists within the US State Department (and further afield) that the term McCarthyism was coined. In the UK, the allegations where, in hindsight, more substantial with the Cambridge Five being, perhaps, the most famous double agents in British Intelligence history but there were others, such as George Blake who betrayed the details of around 40 MI6 agents and at least 1 CIA agent to the KGB.

It is the summer of 1951 and Guy Burgess and Donald Maclean (who would later become know as part of the Cambridge Five) have made international headlines by disappearing. Within the hallowed halls of MI6, a team is put together to try and find out where they have gone. However, is everyone on the team who they say they are? Who do you trust when you can’t trust anyone?