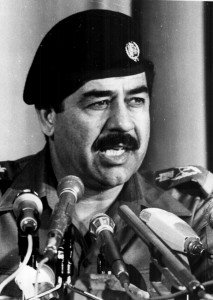 The fall of the Iron Curtain held the promise of an end to espionage – at least on the scale it had previously operated at. However, Iraq’s invasion of Kuwait and the subsequent Gulf War merely changed the protagonists. In the months leading up to the 1996 US elections, it is alleged that Bill Clinton was under pressure to do “something about Iraq”. From there, the CIA, again allegedly, attempted a coup to depose Saddam Hussein. The coup was unsuccessful (or never actually happened) and Hussein remained in power until his capture following the Second Gulf War in 2003.

An operative, codenamed BETRAYER, has been embedded within Hussein’s personal staff ahead of the coup attempt. However, they have failed to report in for the last 3 days. The agents are sent into Iraq to determine his whereabouts and current condition.

Note: I ran a mission based on this idea via PBeM many years ago called Who Betrayed BETRAYER?.