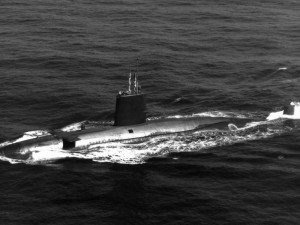 Valiant Class Submarine 1986
In the early 1980s the threat of a nuclear war was almost overwhelming as the tensions between NATO and Warsaw Pact countries heightened following the elections of Margaret Thatcher in the UK and Ronald Reagan in the US. In particular, Reagan’s anti-communist policies and speech (he branded the Soviet Union an “evil empire” in 1983), pushed the threat to heights not seen since the Cuban Missile Crisis.

The agency has intercepted communications from a known Soviet operative. While the majority of the communique has proven difficult to de-code, the remainder instructs the recipient to infiltrate Her Majesty’s Naval Base (HMNB) Clyde in Scotland to attach a device to all nuclear submarines present. The cryptography experts are undecided as to whether the device is explosive or tracking in nature. Additionally, the identity of the recipient is unknown. The agents are tasked with discovering the identity of the Soviet agent(s) and stopping them from completing their tasking.