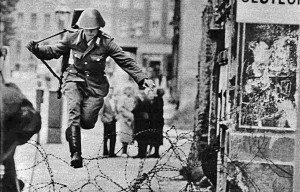 Conrad Schumann
The formation of the Soviet Union in 1922 saw restrictions put in place to keep citizens from leaving and in the aftermath of World War II, there was a mass migration of people from East to West. However, it wasn’t until the Berlin Wall was constructed (following the Berlin Crisis) that defections came to public notice (perhaps the most iconic being Conrad Schumann who leapt over barbed wire into West Berlin just days after construction of the Wall began). There were also defections in the other direction, including the likes of the Cambridge Five. Although defections occurred around the world, Berlin (at least in popular culture) became a hotbed of espionage activity and came to epitomise the cloak and dagger aspects of espionage in the 1960s.

Intelligence has been received that a prominent officer in the Soviet Army wishes to defect. Through coded communications, it has been ascertained that he will be part of a group of military officers visiting East Berlin in the coming weeks. Cover documents will be provided as required to allow the agents to enter East Berlin through Checkpoint Charlie (which allows for travel foreigners, diplomats, Allied military personnel and GDR citizens) and they are tasked with determining if the proposed defection is genuine and, if so, with ensuring that it is successful.