A review by Jeffry Willis.

Covert Ops is described as a barebones RPG of espionage and paramilitary operations. This review covers the Covert Ops Core Rulebook and the Covert Ops GM Operations Manual.

Don’t judge a book by it’s logo. The cover artwork of the Core Rulebook is credited to Eric Quigley. It is a bit stiff portraying a collage of modern actions scenes poses rather than a snapshot or still-frame of an action scene. It feels conservative and safe, not striking or particularly memorable. The people are pretty cool looking and could be recognizable iconic characters. They seem to stand as examples of some of the most typical types of spies or agents.

I like the GM Operation Manual’s cover more, however. It was simply one of the larger interior pieces, but with a solid blue overlay tint. This one is more like a comic book panel or a scene from an actual mission, etc.

Covert Ops as a title is great. However, the logo on the covers is a bit bland. I feel the game could use a more striking font or usage of the titling. The first page with the credits and copyright info has the title in a rough print kind of font which I felt looked cooler and more appropriate than the metallic font style with rivets. NOTE- I happened upon a more updated version of the cover while writing this. Most of this opinion still stands, however.

The interior artwork for both books are all black and white. The Core Rulebook’s artwork is exclusively done by Khairul Hisham who has a great eye for comic book action. Having one artist throughout the core book was very nice and solidly consistent, this works if the artist is good. In this product the artist delivers. The action and figure art is shaded dynamic, while the gear and weapon art is flat clip-art in design. The GM Operation Manual’s artwork seems collected from other sources and used with permission. There is an obvious range of styles and it does take away some of the quality established presented in the Core Rulebook.

The books are presented in single column, lettering is easy to read with no background imagery. Each page has a nice clean header design labeling which chapter the reader is currently on with modern and easy to read fonts throughout. Each page’s footer labels which part of the chapter you are in, a detail I find nice in gaming books. There is not much, if any, wasted space. The artwork is laid out amongst the text nicely.

DwD is expanding the usage of their d00Lite system first appearing in BareBones Fantasy roleplaying game. D10 are the only die type used. The core mechanics are percentile die rolls, rolling a target number or lower. Sometimes the rules call for several d10 dice summed up.

Doubles are critical successes and fails, depending on the target number. Any reasonable action succeeds on a roll of 00-05, while a roll of 95-99 automatically fails. Streamlined simple. Other details of the rules are in line of what one would expect. The game is aiming for solidity more than clever mechanics and they achieved it.

Bones are the game’s term for action points. These are tokens or chips that can be spent to boost rolls or enhance character’s actions. The GM also has access to Bones to oppose the PCs. This makes the phrase “throw me a bone” literal (I see what you did there!)

The d00Lite system uses a simple hitpoint style which they call BPs or Body Points. Usually half of the STR score.

Characters have four attributes. Generating stats options is rolling five d10 and adding 30 for each of them (STRength, DEXterity, LOGic, and WILlpower).

There is a FUDGE/Fate kind of element in the character creations process. With Skills you can choose one as your primary talent, that one thing you do real well, and assign a +20 to that skill (or randomly roll for which skill), Then you get two secondary skills and assign +10 to each of them.

The next step is come up with two Descriptors. These are phrases, etc (much like FATE’s aspects) that help define the character and provide opportunity for DP point rewards- development points are BareBones RPG experience points. There is a Moral Code system to help flesh out motivations and roleplaying, etc. and derivative formulas for movement, attacks and defence.

There are Origin packages that give the character a defined direction as well as appropriate bonuses to certain skills.

I am left with the impression that the system is pretty solid.

One unique take the game has is there isn’t a typical universal list of Skills. The list appears more like a list of Careers or almost Character Classes, yet different than the above listed Origin packages. Each of these are broken down into more focused or specialized skills. The list is Academic, Detective, Leader, Martial Artist, Medic, Pilot, Scout, Soldier, Technician, and Thief. Each of these have a formula anchored to half of one of the attributes +10. Like this… Score: half DEX +10 per pilot level- as an example. It’s an interesting take and I don’t see why it wouldn’t work.

Characters are given an equipment allowance which simplifies the paperwork of keeping track of funds and gear, but also prevents characters from gaining too much monetary resources, keeping the game balanced.

In combat, characters are able to purchase Martial Manoeuvres. These are special moves or techniques that are really specialized Martial Artist skills. Presented on a random table if you wish, which was interesting.

There is a chapter detailing the DPs for character development and making a base of operations. One detail in the DP dispersal checklist that I found kind of neat was there is a phase where one of the characters is rewarded DPs by vote. All the players have to vote for one of the other players (not their own) based on Style- (coolest moment of the session), and Brotherhood (which character demonstrated the most faith and sacrifice for the team). I liked that bit.

The next chapter covers Action rules mainly for combat and other task resolutions. This is very straightforward, not attempting new gimicky dice mechanics.

There are several tables provided for mission generation for the GM which look quite useful. Even a table for cool mission code names!

Covert Ops is not necessarily a generic espionage RPG, there is a pretty nicely fleshed out setting included. The final chapters get into the details of the secret and epic battle between SECTOR and CITADEL.

SECTOR, a mysterious international paramilitary and counter-espionage organization. This is the agency of the good guys secretly fighting the also secret forces of CITADEL. If you are familiar with TSR’s old Top Secret/S.I., you may recognize this as ORION vs WEB with the serial numbers thinly filed off. And this is not a negative thing at all. I loved that setting then, and I’m really digging this version, now.

The part of the GM Operation Manual clearly defines each level of the Operative (the PC)’s Ability Scores. This may feel like it’s directed towards newer gamers, and it might be. But I think it’s a good move eliminating many questions that might exist. This is followed by several tables designed to determine an Operative’s Abilities, etc via random rolls.

I come away from this with a very solid confidence in using this game for running a modern day spy campaign. This fulfills a long-time hunger for anyone who was a fan of the two big percentile die espionage RPGs from the 1980’s (Top Secret/S.I. and James Bond 007, Roleplaying in Her Majesty’s Secret Service). I hope to see long lasting support for this line from DwD Studios.

About DwD Studios: It helped me understand where this game was coming from when I discovered who was making it. DwD Studios are the folks who acquired permission from Wizards of the Coast to host the Star Frontiers RPG line on the web. They’ve done a fabulous job keeping that old game alive and creating new material for Star Frontiers. All with WotC’s blessing. A while back it appeared they may have attempted a similar venture with the Top Secret/S.I. line which didn’t seem to pan out. It is very likely many of the above comparisons and similarities of Covert Ops and Top Secret/S.I. are no coincidence at all.

More information can be obtained from the official website: dwdstudios.com/covertops 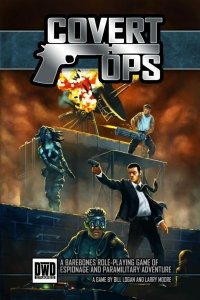